We provide and extend personalized & innovative healthcare services to its customers. 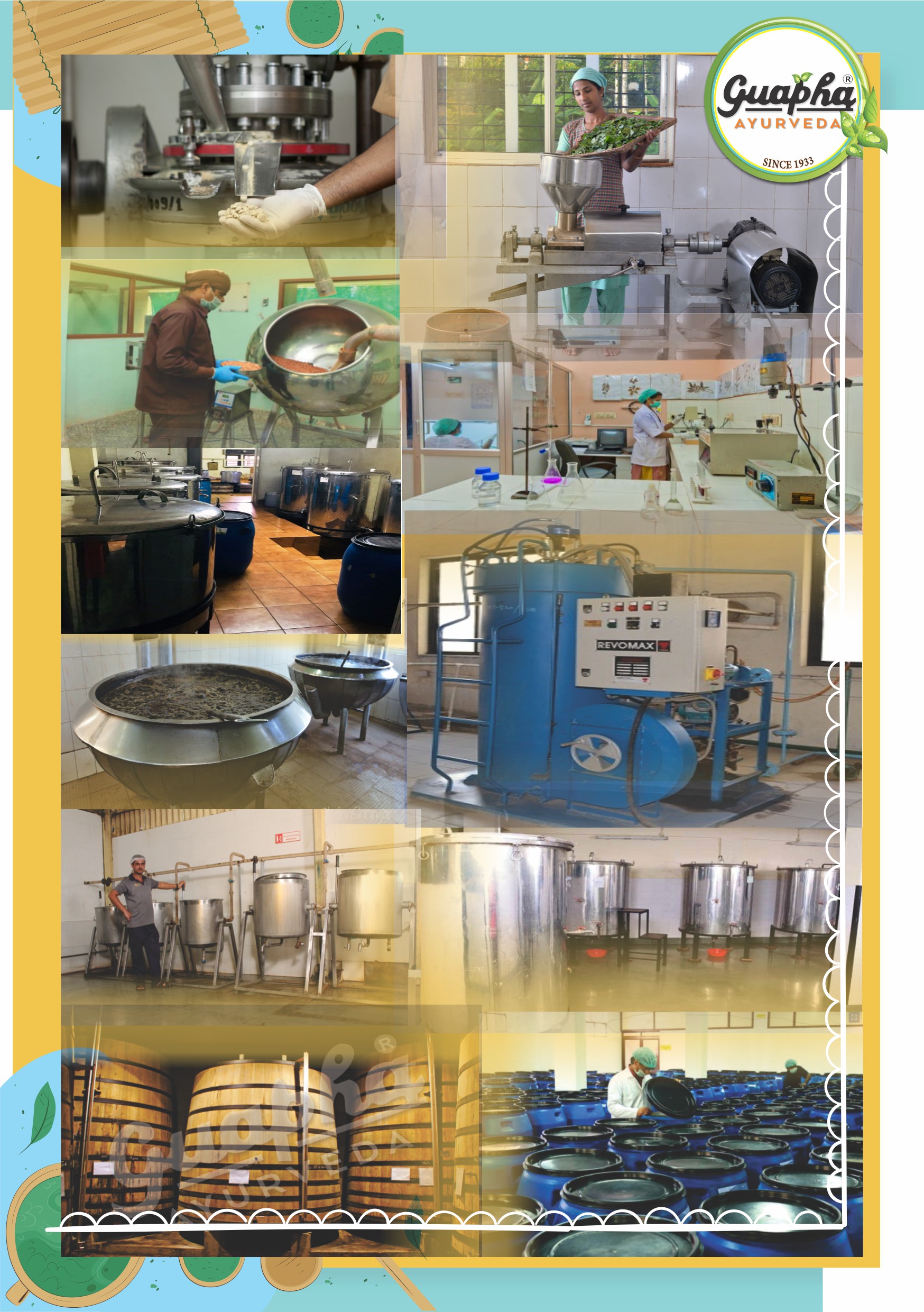 A phenomenal attempt made to popularise Ayurveda by legendary late Shree. Laxmi Prasad Gupta in 1933 led to the foundation of GUAPHA. in Rath, Dist. Hamirpur (U.P.). The renowned physician started manufacturing various kinds of pharmacopeial and patent ayurvedic medicines. In a time when herbal products were regarded with skepticism, our founder's belief in the healing power of herbs was unwavering. He believed that herbal medicines could and should be evaluated on the same quality and efficacy parameters as conventional medicine. This was a big dream with big challenges. But he persevered on despite the obstacles.

Our Growth
About Ayurveda
Ayurveda and Guapha
Our Growth

The rich pioneering spirit was passed on to his brother Late Shree. Moti Lal Gupta who took the company to a different level and soon set the future course for Guapha. The company got famous in Uttar Pradesh, Madhya Pradesh, Chhattisgarh, Delhi, Rajasthan, Maharashtra, Orrisa, and other parts of the country and there was a sevenfold increase in demand of the products.

To meet this burgeoning demand for our products., in 1987 a state-of-the-art manufacturing plant Gupta Ayurvedic Pharmacy Private Limited was established in Jabalpur. Since its inception, Dr. Jaimangal Prasad Gupta, son of Late Shree Laxmi Prasad Gupta has been the in-charge of the company. He has exclusively dedicated himself in the field of pharmacy and took Ayurvedic Medicine into the realm of Scientific Research, Development and Production with a total experience of more than 30 years. The marketing unit of the company has been taken care by his wife Dr. Suman Gupta and son Mr. Utkarsh Gupta who is an M.B.A. and has vast industrial knowledge of marketing trends and research. He is taking the company to new heights with seamlessly integrating technology with ancient ayurvedic methods.

The unit is being constantly upgraded keeping in view of the current trends in manufacturing and without compromising with the basic principles of Ayurveda. The unit has been approved for GMP as per schedule T and has necessary infrastructure, staff & in house drug testing laboratory.

Today, there is growing understanding and appreciation of Ayurveda. In the domestic sector as well as the international arena, there is a growing respect and admiration for the power of Ayurveda. Ayurveda is a  5000 years old Indian health care system, widely practiced, in time with the times. “Ayur” is Sanskrit means “life”, “Veda” means “science”. Knowledge of Ayurveda has been recorded in two of the vedic texts: the Atharva veda, and the Rig veda.

Ayurved texts like Charak Samhita and Sushruta Samhita were documented about 1000 years B.C. It includes in its consideration, longevity, rejuvenation and self-realization therapies through herbs, diet, exercise, yoga, massage, aromas, tantras, mantras, and meditation. Ayurveda treats illness at its source, rather than at the level of symptoms, and helps an in individual to take responsibility for their own health and well-being. The philosophy of Ayurveda is to help people heal themselves. A unique quality of Ayurveda is that healing is promoted by balancing the different energies in the body. Ayurveda believes in the treatment of not just the affected part, but the individual as a whole. Ayurveda, the most profound system of medicine, is the heritage of India and is uninterrupted practice since prehistoric age.

According to Ayurvedic medicine, human body consists of three primary life forces or biological humors, which are Vatha, Pitha and Kapha. These three doshas are called the tridoshas. A balance among these life forces is essential for proper health. Any imbalance among the tridoshas causes a state of un-healthiness or disease. Ayurvedic system says that this imbalance is the effect of the constant reaction of the internal environment of body to the changes in external environment. It is only required that we bring back normalcy to the balance of these doshas, to bring back the state of healthiness.

Other basic concepts of Ayurvedic system are the Saptha Dhathus (the bodily tissues), Srotas (Channals), Ama (toxins and filthy matter) and the trinity of life – body, mind and spiritual awareness. The first step in the method of diagnosis in Ayurvedic form of medicine is to determine the constitution of the person. That means it is the patient who is diagnosed first and not the disease. The same disease might appear in different forms in two persons because their constitution is different. Due to this variation in constitution the medicines and treatment may be different for two people with the same illness. This difference in treatment methods according to the constitution is essential to bring back the natural balance of the biological doshas. The constitutional approach is the essence of the Ayurvedic system.

Ayurveda is also known as ‘Ashtanga Veda’ (the word literally means ‘Eight branches of knowledge’) as it is divided into eight specialized branches. The eight branches of Ayurveda are:

Of the above the seventh one, that is rejuvenation therapy is a unique method which Ayurveda performs.

Natural and herbal health care system ,which is totally safe. Body, mind, spirit health care system for long creative life. Treats the whole person and eliminates the cause of the disease. Emphasis in preventive medicine. Effective treatments to detoxify the body. Highly perfected rejuvenation treatments. Preventive as well as curative treatments. Human being is a microcosm (small universe) that is part of macrocosm. Rhythm or life is intimately connected with the rhythm of the universe. Diseases are due to improper eating and life style ignoring ones special body type, environment and age. By establishing perfect balance between inner and outer world body, mind and spirit would be in perfect health. Human body has the power to heal itself.

There are two aspects to Ayurveda Treatment.

Manages the symptoms of the disease and treats the cause of the disease with the help of various Ayurveda medicine and therapies. In Ayurveda there are thousands of medicines consisting of herbs, minerals, and biological products, which are used singly or jointly to suppress and cure diseases, particularly when the disease is at an early stage.

is one the most important and advanced techniques in Ayurveda and is an internal purification process. Purification can be used to cure diseases and at the same time to promote the healthy state of the body. Shodana chikitsa removes the Ama and Mala (toxins) from the body and restores the balance of the Doshas. Shodana Chikitsa consists of a three-stage purification process as follows:

Our ancient worshipful saints could again see the human body is made up of five basic elements i.e. earthen, water, energy, air and space. balancing the different energies in the body. This life-science could see the physiology of human body in three Humors (Tridosha) & human mind in another set of three Humors (Sathwa-Rejo-Thama). These are known as Vata, Pitta and Kapha (the “Doshas” or body humors). The Doshas are the three main combinations of the five elements (ether, air, fire, water, and earth). These five elements in the body can be balanced through diet and herbs that possess the essence of each element.

Shamana therapy involves suppression of vitiated doshas. The process by which disturbed doshas subsides or returns to normal without creating imbalance of other humours is known as shamana.

Pathya Vyavastha comprises indications and contraindications in respect of diet, activity, habits and emotional status. Emphasis on do’s and don’ts of diet etc is laid with the aim to stimulate Agni and optimize digestion and assimilation of food in order to ensure strength of tissues.

Nidan Parivarjan is to avoid the known disease causing factors in diet and lifestyle of the patient.

Satvavajaya concerns mainly with the area of mental disturbances. This includes restraining the mind from desires for unwholesome objects and cultivation of courage, memory and concentration.

Rasayana therapy deals with promotion of strength and vitality.

Ayurveda is not simply a system of medicines but giving light to the way of healthy living. Ayurveda consider a human being in totality keeping in view his subtle relationship with the environment.

The history of India has revealed the wide usage of medicinal herbs in promoting health and beauty. Ancient Indian yogis have discovered and extracted the goodness of medicinal plants for thousands of years. This is known as ‘Ayurveda’, the gift of nature synthesized for the benefits of mankind.

Our body faces a constant barrage of chemicals everyday from pollution to harsh chemically formulated products; which affects its natural harmony & balance. Today, nations all over are gradually adopting the qualities of this traditional Indian science for normal functioning of human metabolism and more joyous lifestyle.

India is an ocean of ayurvedic secrets. At Guapha, we use modern science to rediscover and validate the Ayurvedic secrets. Guapha have thoroughly researched and uses cutting edge technology to scientifically validate the various health benefits and potential medicinal effects of various herbs. Our products have helped millions to alleviate their ailments and live a healthier life. We focus on holistic wellbeing of the individual.

Our research begins with the selection of raw herbs with promising activity based on traditional texts and backed by experience and observations of our team of herbalists, scientists, doctors and practitioners. Polyherbal formulations of these selected herbs are made in order to provide a wide scope of pharmacological activity.

Our state-of-the-art Research & Development unit forms the backbone of our organization. It primarily focuses on new product development and maintaining therapeutic efficacy of our products. It also works towards introduction of convenient and appropriate dosage forms and ensures highest degree of stability and efficacy of our wide therapeutic range. Being dedicated to the healing powers of Nature, we strongly believe in the principles of Ayurveda, which advocates that disease prevention is equally important as disease management.

The standardization of herbal medicine is more arduous and laborious challenge compared to process used for allopathic medicine. Guapha’s latest technology and equipments have made the process look simpler. Researching Ayurvedic principles and capturing its benefits in our products has been the hallmark of Ayurveda at Guapha. Using modern methodology and techniques, Guapha has made this alternate method of treatment with no known side effects available for people all over the world.

To be a Leading International Herbal Healthcare Company, Improving Quality of Life.

Provide Standardized and Researched Ayurvedic Healthcare Products and services for consumer well being.

At Guapha, every effort has gone into researching, developing and producing quality medicines under controlled conditions from source to packaging. The organization has its core values clearly outlined:

Leave your email to get all hot deals & news which benefit you most!
© 2020 Guapha. All Rights Reserved.
We accept:

Select the fields to be shown. Others will be hidden. Drag and drop to rearrange the order.
Click outside to hide the compare bar
Compare